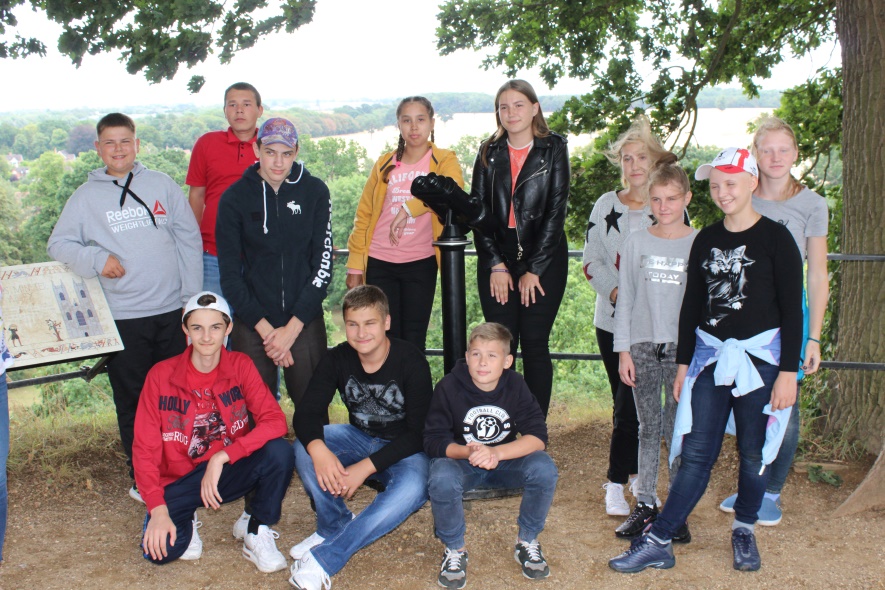 In 2017/18 Solihull Group members organized several fundraising events, including a Christmas and an Easter Coffee morning and a Ladies Lunch. We also received some very generous donations, both personal and from local groups such as Rotary, Lions and GNO.  Together the money raised and donated enabled us to invite a group of children for a four week recuperative break and also helped towards CCP projects in Belarus, providing support for children’s cancer and hospice care and help with projects for children & young people with disabilities.

Solihull Group invited 12 teenagers age 13 to 15 (6 boys & 6 girls). They were selected by CIT, a Belarusian children’s cancer charity.  In June we received some information about the children. All were in remission; mostly from leukemia, also Neuroblastoma, spinal cancer and Hodgkin’s Lymphoma. They had endured, lengthy treatment and operations, including six having received bone marrow transplants. Several children were from very remote, poor villages and four had lost a parent. They were from different regions of Belarus and met for the first time when they applied for visas at the embassy.

On 21st July the group arrived at Manchester airport, accompanied by 3 adults; lead interpreter Ira, student Kate and Doctor Natalia. They were to stay for two weeks in pairs with local host families, then together at a residential school for a further two weeks. On arrival in Solihull they were collected by their host families and soon settled in their pairs. They were a lovely, quiet, polite, well behaved group. The following day the children were delighted to receive new rebranded counterfeit clothing and trainers from HIS Church, and then Lloyds Conference Centre welcomed the children and families for a lovely lunch. The following day some great team building events at Kingsbury Water Park meant they soon started getting to know one another. A varied and extensive activity schedule had been organized and during the 2 weeks spent with families they met almost every day; Severn Valley Railway, the seaside, Laser Quest, sailing at Shustoke, Warwick Castle, Stratford and Drayton Manor to name bit a few. They also visited the Mayor and went swimming at Tudor Grange Baths. Specsavers provided eye tests, with five receiving glasses; they were also seen & treated by local dentists. New activities this year were a skittles night at Hall Green HG Club and learning to play bridge at West Midlands Bridge Club; both were very successful and enjoyable events. Days out and activities were much enjoyed by all, as was time spent at home with their fun, kind & caring host families. The fortnight quickly passed and it was soon time to move on. A team of volunteers set up home for the group at the residential accommodation in Kings Norton. After a wonderful two weeks with Host families the children packed their bags. Families said goodbye to them at Flash Climbing Centre, where the children enjoyed climbing and circus skills.

The group then went by minibus to Lindsworth School, Kings Norton. They settled quickly and loved being together. The accommodation is perfect for the group; there is a lovely large living area and games room, so any spare time was spent playing board games, bridge, snooker, table tennis, or just chilling out watching DVDs. The children stayed in their pairs in twin rooms with ensuite bathrooms. Ira, Kate & Dr Natalia were a great team, working hard to ensure the children were well and happy. Volunteers also stayed with the group; others provided delicious meals and picnics, drove, and accompanied them on more fantastic activities and days out which were either donated, at reduced price or sponsored by companies and individuals. The following day there was a special treat with an amazing day sightseeing in London. Other trips included Coventry, Kenilworth Castle, a theatre trip, Rolls Royce, Malvern Hills, cycling in the Peak District & West Midlands Safari Park.

There were brilliant activities; a Harvey Davidson evening, swimming, football & boxing, massage,   horse riding and craft. They even had new styles at Aesthetics Hair Salon before dinner at The Forest.

The fresh air, exercise and healthy food meant that they gained in strength and stamina, and they enjoyed every moment! The final night, as a thank you to everyone involved, the children performed a Farewell Concert; a wonderful evening with music, singing, dancing, fun & laughter. The happy occasion made it easier when it was time to say goodbye.

At times it was very easy to forget they’re in remission from cancer. All are amazing children with enormous enthusiasm and love of life. Our aim is that the recuperative holiday will boost their damaged immune systems and they benefit physically & psychologically. They returned home to families and friends in Belarus having had the holiday of a lifetime, looking healthy, happy & confident and with many wonderful and long lasting memories to treasure.

THANK YOU TO EVERYONE WHO PLAYED A PART IN GIVING TWELVE VERY SPECIAL CHILDREN A FANTASTIC HOLIDAY TO REMEMBER; especially host families and helpers, those who organised, accompanied or sponsored trips or provided activities, drove or supplied delicious picnics,  evening meals or fruit.  Thanks also to those who donated or supported fundraising events. If you would like to find out more about becoming a host family or want to help in some way, you just need to be kind, caring, fun loving and have some time to spare for some very deserving children. Please get in touch:  0121 705 3707 or email kenkath.ruane@gmail.com